One of the fun areas for Shelley White of Doing Earth Pottery is to create different items that can be used for Home decor items.

For Halloween, she has created her Handcrafted Raku fired Halloween pumpkins decorated with horsehair an ideal item for any Halloween home decor.

Raku became popular with North American potters in the late 1950s Americans kept the general firing process, that is, heating the pottery quickly to high temperatures and cooling it quickly, but continued to form their own unique style of raku.

It is raku’s unpredictable results and intense color that attract modern potters. These patterns and color result from the harsh cooling process and the amount of oxygen that is allowed to reach the pottery. Depending on what effect the artist wants, the pottery is either instantly cooled in water, cooled slowly in the open air, or placed in a barrel filled with combustible material, such as newspaper, covered, and allowed to smoke.

Unlike traditional Japanese raku, which is mainly hand-built bowls of modest design, western raku tends to be vibrant in color and comes in many shapes and sizes. Western raku can be anything from an elegant vase to an eccentric abstract sculpture. 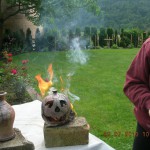 Flaming pumpkin right out of the Raku Kiln

Although some do hand build, most western potters use throwing wheels while creating their raku piece. Western culture has even created a new sub-branch of raku called horse hair raku. 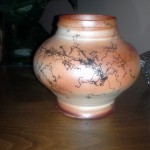 These pieces are often white with squiggly black lines and smoke-like smudges. These effects are created by placing horse hair, feathers, or even sugar on the pottery as it is removed from the kiln and still extremely hot.

These have been a very popular item as the interest in home  decorating for Halloween has exploded.

Come and add a truly unique Halloween Decor item to your home or Business.

But sorry sadly no pumpkin pie