What is a Yarn Bowl from Doing Earth Pottery

Home / What is a Yarn Bowl from Doing Earth Pottery

What is a YARN BOWLS BY DOING EARTH POTTERY

When we were younger our mothers were always doing some sort of craft.

The one  craft I remember most is Knitting.

My mother  made sweaters mitts,toques socks to name a few.

She continued to make them for my children and all of the grand children
I really thought that that it was a dying craft.

Many people continue knitting and now younger people are picking up the needles to make many new a wild collections.

A Brief History of Knitting

Knitting is a technique of producing fabric from a strand of yarn or wool.

Unlike weaving, knitting does not require a loom nor other large equipment, making it a valuable technique for nomadic and non-agrarian peoples.

The oldest artifact with a knitted appearance is a type of sock. It is believed that socks and stockings were the first pieces produced using techniques similar to knitting.

These socks were worked in Nålebinding, a technique of making fabric by creating multiple knots or loops with a single needle and thread.

Many of these existing clothing items employed nålebinding techniques; some of them look very similar to true knitting, for example, 3rd-5th century  Roman-Egyptian toe-socks.

Several  of these pieces,have been mistaken for knitting or crocheting.

Most histories of knitting place its origin somewhere in the Middle East, from there it spread to Europe by Mediterranean trade routes, and then to the Americas with European colonization.

The earliest known examples of knitting have been found in Egypt and cover a range of items, including complex colorful wool fragments and indigo blue and white cotton stockings, which have been dated between the 11th and 14th centuries

Here are some so the Yarn Bowls from Doing Earth Pottery
. 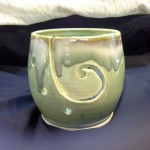 A nice example of our Green Yarn Bowl

If you want get an idea who likes to knit or crochet Well just Google” what age group likes to knit” and 11 pages of about 9,130,000 results comes up

If you know a Knitter or know someone who is using yarn or wool, these would make a great gift.

Come and see the selection here at Doing Earth Pottery