One of the fun areas for Shelley White of Doing Earth Pottery is to create different items that can make Unique Home decor items.

It is that time again. It seems that every 2 to 3 Years  Shelley gets out the Raku Firing Kiln for Halloween home Decorations

It is Raku’s unpredictable results and intense color that attract modern potters. These patterns and color arise from the harsh cooling process and the amount of oxygen that is allowed to reach the pottery. Depending on what effect the artist wants, the pottery is either instantly cooled in water, cooled slowly in the open air, or placed in a barrel filled with combustible material, such as newspaper, covered, and allowed to smoke. 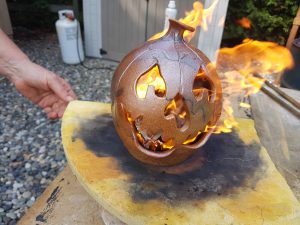 Although some do hand build,  potters do use throwing wheels while creating their raku piece. Western culture has even created a new sub-branch of raku called horse hair raku.Horse hair Raku is a method of decorating pottery through the application of horsehair and other dry carbonaceous material to the heated ware. The burning carbonaceous material creates smoke patterns and carbon trails on the surface of the heated ware that remains as decoration after the ware cools.https://en.wikipedia.org/wiki/Horse_hair_raku

The fun part is when they receive their blackened eyes and inside. 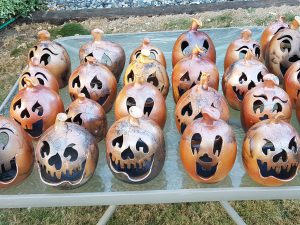 When it comes to Home decorating  Raku pieces are a favourite form to display.  It  gives a 3-dimensional feeling, and Horsehair decorated pieces are among the most popular

During this firing, other  pieces were  also produced one in this style and are on display in our Gallery in Yarrow BC 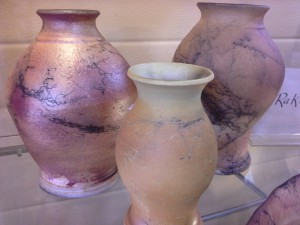 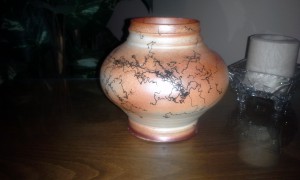 The Pumpkin Family is available le in our gallery if you are looking for something special for your home or as a gift for someone special.

Doing Earth Pottery in Yarrow BC